Portuguese singer-songwriter Magda Mendes lives abroad since 2002. In search of roots, rest and inspiration, she decided to go back to her mother’s village – Bairrada (Portugal). Magda didn’t go alone: she gathered an international group of musicians and filmmakers and flew to Portugal.

For two weeks they lived amongst the villagers, listening to their stories, singing with them, learning about almost lost traditions. 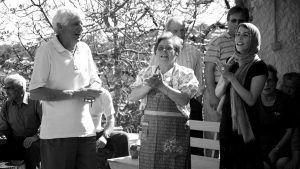 The old primary school, shut down the year before due to lack of children, was the chosen place to rehearse and record the new material. During the two week art residency the album and the documentary “Casa da Bôxa” were born.

” The beautiful old school was a perfect place to work: fertile ground for creativity, calling me with the eco´s of children´s laughter “
Magda Mendes 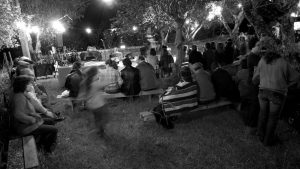 “The interaction with the Bairrada villagers was extraordinary: nourished by all their care and food it’s no wonder that the music also became drenched with the Bairrada flavour. The music sounds like this little village, its food, its smells, its trees, its sadness, its hopes and dreams.”